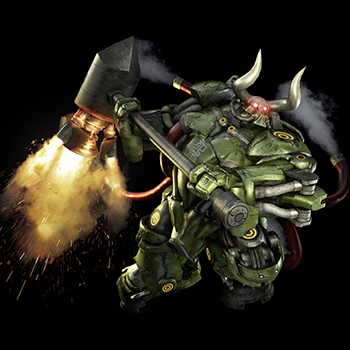 You're gonna get nailed!
Advertisement:

Sometimes a weapon is too heavy to swing around quickly, if swung at all. What better way to address this problem than making the weapon jet powered? Not only that, the jet will make every powered swing stronger than if they aren't boosted.

How the weapon avoids flying out of the wielder's hands, throwing them off balance (let alone flooring them or taking them for a ride), or dislocating multiple joints with every swing is rarely addressed. Additionally, if one looks at it from the other direction —Not as attaching a rocket to a hammer, but as attaching a hammer (and wielder) to a rocket— the idea becomes even more impractical. You'd have much greater range, control, and reduced risk of dislocation if you just took the rocket off the weapon and fired it at the enemy. You know, like a rocket.

The weapon in question is usually a nightmarishly huge hammer, though axes and warpicks are also possiblenote despite the fact that the extreme energies involved with such a weapon would over time blunt an axe or pick to the point of it basically becoming a hammer anyway; regardless of which one, they will almost always be of the two handed variety, which makes sense, as the above mentioned issues with control would be even worse with only half the hands to hold onto the thing (then again, you'd probably also only dislocate the joints in the one arm).

Sometimes, such a weapon will be used like a Jet Pack or Not Quite Flight. A downplayed variant of this is wielding a normal weapon, but you get the boost from your own Jet Pack or boots. They may justify Flying Weapon. Weaponized Exhaust is also an option.

An example of Rule of Cool. Also a case of playing with Bottomless Magazines, since the rockets pretty much never have to be refueled. Sub-Trope to Enhanced Archaic Weapon. Rocket Punch is a Sub-Trope. See also Recoil Boost.