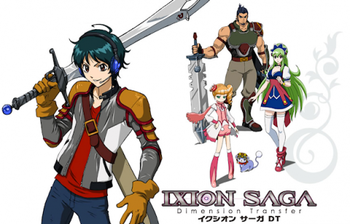 Ixion Saga: Dimension Transfer is about your average gamer, Kon Hokaze. When playing his favorite MMO, he comes across a female player with a very attractive avatar, and, after having bonded with her, not only assumes that the actual player is just as beautiful, but that he's finally found love! But before he can ask that they meet in real life, the buxom beauty asks if Kon can do something very important for her...

Elsewhere, a group of travelers are attacked by a military troupe for an unexplained reason. When they're cornered and on the ropes, Kon suddenly comes plummeting from the heavens, still in his chair and not wearing any shoes. Kon lands on top of Variation, the man leading the troupe, and manages to cause enough of a commotion so that he and the others get away.

The travelers introduce themselves as the warrior Sainglain, the beautiful Transgender Mariandel, and Princess Ecarlate. The three explain that Ecarlate is on her way to be married as part of a treaty that her nation's military wishes to prevent, and she enlists Kon as her third bodyguard. Together they must get the princess to her wedding while fighting against Erecpyle Dukakis, leader of his militant Incognito faction who wants to stop peace from coming to the land.

The world Kon winds up in is based on Ixion Saga, an online game by Capcom.