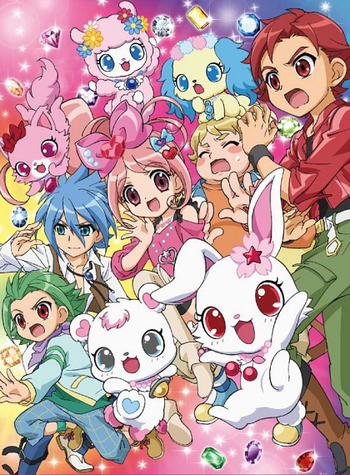 Jewelpet Kira☆Deco! is the fourth entry in the Jewelpet anime.

Ruby, Garnet, Sapphie, Labra and Angela lead average lives in Jewel Town. One day, Sapphie discovers a book about their Creation Myth; Jewelina created the Jewelpets because she wanted someone to dance with. It is said that that was a time filled with joy. Unfortunately, one day a meteorite struck the Mirror Ball which shone down on Jewel Land alongside the two moons, and it broke into innumerable shards which scattered all across the world. Jewelina turned to stone out of sheer sorrow, and has remained like that ever since.

Hearing about the story prompts Ruby and her pals to go search for the Mirror Ball's shards, with little success. But that night, a meteorite comes out of a vortex and crashes near. From it, five young humans, called the Kira Deco 5, emerge, and reveal that they too are searching for the shards, called Deco Stones, in order to save the human world from the Eternal Darkness. So the team and the Jewelpets team up and start their quest.

Opposing them are the evil organisation known as Decoranain, whose members include Coal, Ruby's rival Opal and her lackey Io, as well as their mysterious boss, the Dark General.

At least they go back to normal by the next episode.

At least they go back to normal by the next episode.