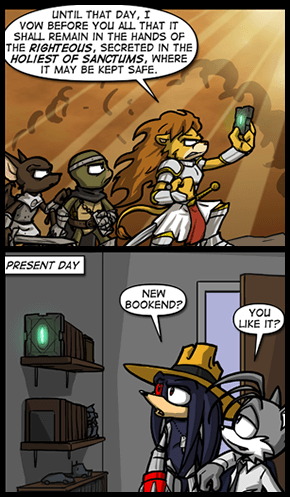 Washington: You've been hiding one of the most advanced pieces of technology known to man... so you can hang it in your living room?
Grif: ... well, when you say it like that, it sounds dumb.
Washington: That's because it is dumb!
— Red vs. Blue
Advertisement:

So there's this MacGuffin, right — perhaps one that The Hero and company must find in order to stop the The End of the World as We Know It, or maybe something that explains all they need to know to solve some problem at hand. Somebody goes searching for it, looking under every rock, solving every puzzle, and maybe even going all apeshit on someone who might know where the MacGuffin is. But eventually they find the MacGuffin, and discover that this priceless, important, amazing artifact/object/spear/war-souvenir/whatever is in the hands of someone perfectly willing to give it up.

Because they're just using it as a paperweight.

Priceless Paperweight, therefore, is when said important and/or priceless artifacts or other objects are being used for ridiculously mundane purposes, like paperweights, footstools, or a pretty decor for their bookshelf. Oftentimes this is Played for Laughs, usually by showing The Hero's or some other person seeing the usage's shocked reaction to such a stupid way of using something so valuable. Often used as a form of Conspicuous Consumption, especially in the hands of a villain; it's their way of saying that the object means nothing to them.

Oddly enough, this is sometimes Truth in Television, as noted by some examples below.

Compare with Grail in the Garbage, Hidden in Plain Sight, Mundane Utility, Useful Book, Plot Device All Along and Worthless Yellow Rocks.

Upon recovering a rare Prothean artefact from an abandoned dig site, Shepard uses the 50000+ year old relic to decorate a coffee table.

Upon recovering a rare Prothean artefact from an abandoned dig site, Shepard uses the 50000+ year old relic to decorate a coffee table.