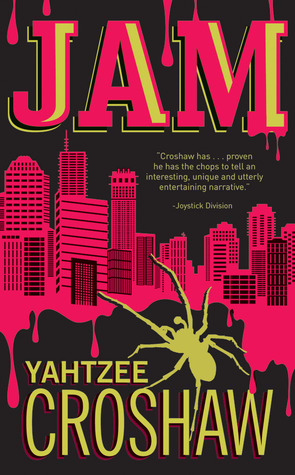 It's about an apocalypse. With jam in it.
I woke up one morning to find that the entire city had been covered in a three-foot layer of man-eating jam.
I didn't notice straight away.
Advertisement:

Jam is a post-apocalyptic novel from 2012 by Ben "Yahtzee" Croshaw, with a twist, and even a couple of satirical jabs at some of the apocalypse genre's recurring tropes.

Travis, an unemployed everyman from Brisbane, wakes up one morning to discover that the city has been covered in a thick layer of a red, sticky substance that smells distinctly of strawberry, not too much unlike jam. The problem, however, is that the substance has one major characteristic that it doesn't share with jam: It likes to eat any organic thing it touches, and that unfortunately includes humans.

Travis and his friend Tim are forced to band together with a group of other survivors, and together they attempt to stay alive until rescue hopefully arrives, which is really tricky when you can't get down to street level without getting eaten.