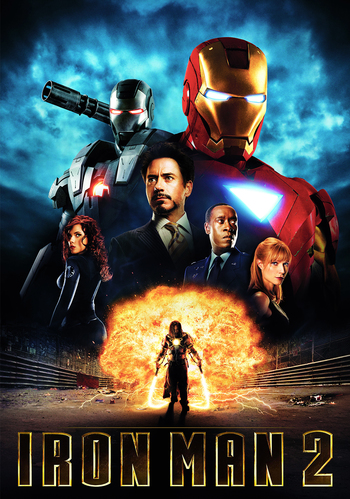 It's not the armor that makes the hero, but the man inside.
"If you could make God bleed, people would cease to believe in Him."
— Ivan Vanko/Whiplash
Advertisement:

Iron Man 2 is the second movie in the Iron Man Films series, released in 2010 and based on the Marvel Comics character Iron Man, starring Robert Downey Jr. as the armored Super Hero and directed by Jon Favreau. It is the third film in both the Marvel Cinematic Universe and its Phase 1, and notably, the first installment released after Disney bought out Marvel in 2009; however, both this and the next two installments were still distributed by Paramount Pictures.

Several months after the events of Iron Man, the film deals with the consequences of Tony Stark outing himself as Iron Man and becoming the world's newest defender. His first major issue is congressional hearings about sharing his tech, with rival (and perpetually second-place to Tony) industrialist Justin Hammer (Sam Rockwell) standing the most to gain. Despite their best efforts, Tony is untouchable: unbeatable in conferences and unstoppable as Iron Man. But his invincibility is tested by Ivan Vanko/Whiplash (Mickey Rourke), a man with a grudge against the Stark empire who is more than capable of challenging Tony's genius, as Tony is also dealing with a slowly fatal medical condition resulting from his arc reactor implant. Black Widow (Scarlett Johansson) also features in a supporting role and Lt. Col. James "Rhodey" Rhodes (now played by Don Cheadle) suits up as his alter-ego War Machine.

Followed by the 2012 Crossover film The Avengers and the 2013 sequel Iron Man 3.