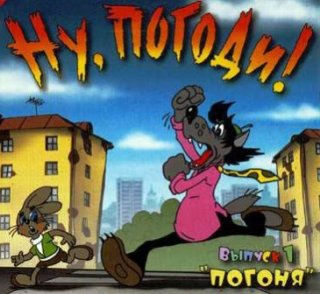 Nu, Pogodi! (Ну, погоди!, "Well, Just You Wait!" in English) is a Soviet (and now Russian) children's cartoon created by Soyuzmultfilm. It originally ran for sixteen episodes between 1969 and 1986, with an average of one short released every year or two. Further shorts have since been produced sporadically, including occasional commercial or PSA tie-ins.
Advertisement:

In classic Road Runner vs. Coyote fashion, it follows the adventures of Volk, a chain-smoking, alcohol-swilling lowlife wolf, who constantly chases after the youthful, athletic and intellectual hare Zayets through an urban environment. Despite its resemblance to a certain cat and mouse cartoon, the creators swear up and down that they had never seen a single Tom and Jerry cartoon when the series was in production (they claimed that their biggest western influence was post-World War II Walt Disney films).

Most notable was the show's eclectic soundtrack, which included everything from old Russian folk songs to jazz rock to techno, which the animation is often synchronized with down to a frame.

All 21 of the shorts are available on YouTube in varying capacities, including on the official Soyuzmultfilm channel

. Despite its minimal dialogue, the show has an English dub by Filmexport Studios

for a 3D animated reboot, under the subtitle Kanikuly (Каникулы meaning "Holiday") was released on November 11th, 2021 from Soyuzmultfilm's YouTube channel, premiering its first episode a month later on December 17th. It features updated designs, targeting a much younger demographic. The first season will consist of 26 episodes each 7 minutes in length, with a planned second season in the works.

named it the single most popular cartoon in all of Russia, beating out other regional hits like Masha and the Bear and Prostokvashino by a wide margin.

Contrast Masha and the Bear, a Russian cartoon where the duo gets along very well.

Has nothing to do with nu metal.