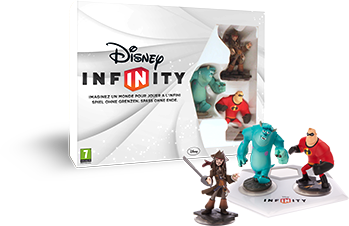 Disney Infinity was an Action-Adventure sandbox Toys-To-Life Game series that ran from 2013 to 2016. The series, inspired by Toy Story 3: The Video Game's Toy Box mode, was made by Avalanche Softwarenote with assistance from several other developers; also, not to be confused with Avalanche Studios and published by Disney Interactive Studios. Taking a page from Skylanders, the game used figures of Disney characters to unlock content. The idea was that players are literally playing with virtual toys of Disney characters, and while certain characters can enter themed "Play Sets" based on the movies they come from, the Toy Box mode allows players to take their toys and play any way they want thanks to a deep Level Editor.

Many Disney characters, from Jack Skellington to Wreck-It Ralph and various others from Pixar, Disney Animated Canon, live-action Disney movies, non-canon Disney animated movies, and Disney's television series, are in Infinity. The first game, retroactively known as Disney Infinity 1.0, was released for Wii, PlayStation 3, and Xbox 360, while the Nintendo 3DS received a version called Toy Box Challenge complete with its own smaller base.

The third and last game, Disney Infinity 3.0, was released in August 2015, introducing the Star Wars universe to the game. This was also the first and only game in the series to support downloadable updates, as Disney Interactive seemed to focus on expanding and supporting the 3.0 platform for some time instead of upgrading to a "4.0 Edition". It was released for all the same platforms as 2.0 except for the PS Vita. It was also later released for the Apple TV, which had its own digital version of the game complete with its own unique base.

There were also various digital versions of the game released for PC, iOS, and Android. They're not compatible with the Disney Infinity base, instead giving players the option to buy digital figures and power tokens, which would seem like it's kinda missing the point of buying physical figurines in the first place. Thankfully, most physical Disney Infinity figures, play sets, and all Toy Box Expansion Games came with a web code that gives you the digital version for free,note The Marvel Battlegrounds Play Set and The Vision, Ant-Man, and Black Panther figures come with web code cards, but because none of these are in the digital versions, redeeming them are practically pointless. The Baloo figure also comes with a card, but among the digital versions, he's mobile-only. The Alice Through the Looking Glass figures and Finding Dory Play Set and figures completely dropped the web code cards, becoming console-only. and using the hexagonal power discs in the console versions also unlock them in the digital versions as well. After the franchise's cancellation, the mobile versions and free-to-play PC versions have been disabled and were taken down (see below), while Steam received "Gold Editions" of all three games. They contain almost all content that were ever released in the franchise, and anyone who bought DLC for these versions will receive them for free. The entire Gold Collection can be found here

After the digital 3.0 versions failed to receive

, it was announced on May 10, 2016 that Disney Infinity would cease production by the following month

, as it was just costing too much money to keep the series and figures rolling. As part of the end of the franchise, Disney Interactive Studios had its publishing unit shut down, relegating it to a licensing unit for Disney's properties, and developer Avalanche Software closed (although the developer reopened under Warner Bros. Interactive Entertainment ownership in January 2017). The home and handheld console versions and the newly-released Gold Editions of all games still function, but have lost online functionality. The mobile and standalone PC versions of all games were rendered unplayable on September 30, 2016, with the Apple TV version of 3.0 removed from the App Store and the Disney Infinity team no longer accepting submissions for Toy Box uploads on the same date. The original Steam releases of 2.0 and 3.0 have been removed on December 9, 2016 (the day the Gold Editions were released). The Windows Store versions of all games and the Apple TV version of 3.0 have been rendered unplayable on March 3, 2017, the day that all remaining online services for the game have been disabled.

In October 2017, it was announced that figures from Disney Infinity would be reused as action figures in a toyline known as "Toybox", providing a legacy for the franchise.

There are character sheets that, despite this franchise's end, still Need Wiki Magic Love.

Update required:note These characters and play sets are not playable in the discontinued digital versions of the game, with the exception of Baloo being playable in the (disabled) mobile version.

Ultron pilots a massive version of himself to attack Asgard. Because his body is made of vibranium, it's completely immune to blasts from the Hulkbuster, so the heroes have to go inside Giant!Ultron to stop him.

Ultron pilots a massive version of himself to attack Asgard. Because his body is made of vibranium, it's completely immune to blasts from the Hulkbuster, so the heroes have to go inside Giant!Ultron to stop him.