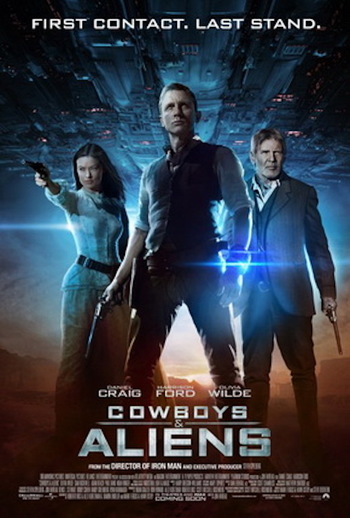 A 2011 film directed by Jon Favreau, produced by Steven Spielberg and Ron Howard, and starring Harrison Ford, Olivia Wilde, Daniel Craig, Sam Rockwell, Clancy Brown, and Keith Carradine, set in The Wild West. It is based on a 2006 graphic novel, which even started as a movie pitch but Development Hell made the comic be released first.

An amnesiac man by the name of Jake Lonergan wakes up in the middle of the desert with a strange metal device on his forearm. He soon finds himself to be a wanted outlaw hunted by Federal Marshals and bounty hunters, but then discovers a much more pressing issue when mysterious lights begin to shine in the sky, and the device on his forearm activates to devastating effect.