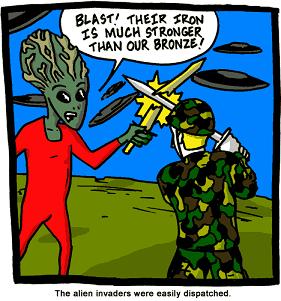 "Your superior intellect is no match for our puny weapons!"
— Kang, The Simpsons
Advertisement:

They're in interstellar space, using an FTL drive, but the First Contact team who met up with them can't figure out how or why — by all rights they should be stuck on their homeworld because they've barely figured out atomic power, or steel, or starting fire with flint. They're an anomaly. Sometimes it's because they've stolen a technology they don't know how to create themselves. Sometimes a Precursor race gave it to them or left them instructions on how to build it. Sometimes it's a simple fluke. Sometimes it's author's Critical Research Failure or being poorly versed in the concept of the importance of certain scientific discoveries for just about anything, technological prerequisites and Required Secondary Powers.

Whatever the reason, the result is someone making their way into space far earlier than other civilizations might think possible.

Contrast with Sufficiently Advanced Alien, naturally, and with Aliens Never Invented the Wheel, where the technology (or cultural trait) the aliens lack is just an oddity, something they always got by without. Sub-Trope to Low Culture, High Tech. This is a very common feature of Space Orcs.