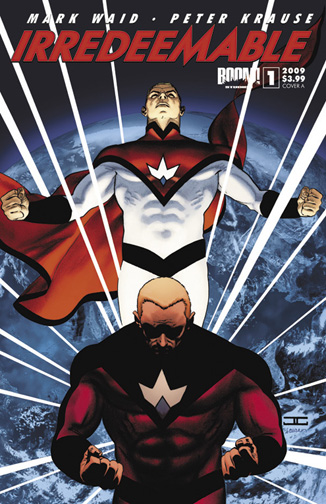 Beware the Superman: The Series. No more Mr. Nice Guy.
How did he come to this?
What became of the hope and promise once inside him?
What happens to the world when its savior betrays it?
What makes a hero irredeemable?
Advertisement:

Irredeemable is a Comic Book series written by Mark Waid, with art by Peter Krause and Diego Barretto.

The Plutonian was Earth's champion, its first superhero, the most admired and trusted of his kind, our savior... but something has gone terribly, terribly wrong. Seemingly without reason, the Plutonian has begun to wage war on humanity, killing indiscriminately, annihilating entire cities and going overnight from the planet's greatest hero to its bloodiest mass murderer. A group of former friends and fellow superheroes, having narrowly escaped the Plutonian's ruthless and swift butchering of the superhero community, are determined to find a way to stop him; however, the Plutonian guarded his identity — and most importantly, his weaknesses — zealously, leaving them only with a few scraps of information to follow in order to find out why the Plutonian has turned his back on his former ideals — and how to defeat him...

Another title in the same universe, Incorruptible, began in December 2009. Its plot is the obverse of Irredeemable: as a result of the Plutonian's rampage, supervillain Max Damage has an epiphany and decides to undergo a Heel–Face Turn. Both titles ended in 2012 at Issues #37 and #30 respectively.

In May 2016, news came that 20th Century Fox got the rights to a film adaptation.

The adaptation was supposed to be directed by Adam McKay (The Big Short and Anchorman), but Disney's buyout of 20th Century Fox put the film in Development Hell. In 2022, it was announced

that Netflix would be adapting both Irredeemable and Incorruptible alongside The Harder They Fall (2021) director Jeymes Samuel.

Irredeemable and Incorruptible provide examples of the following tropes: