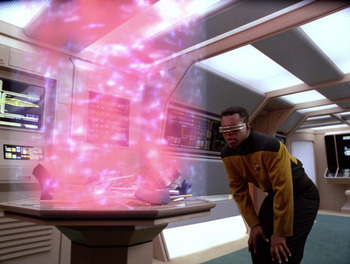 "As long as there aren't any surprise malfunctions that suddenly shut down the force field, we're all perfectly safe."
Advertisement:

A special forcefield that prevents a highly volatile power source, anti-matter engine core, Captured Super-Entity, an orb of Pure Energy, etc., from obliterating everything around it in a flash of pure white. Maintaining the Containment Field is the most important job of the starship's engineer, the wizard's acolytes, or the Barrier Maiden / Warrior. Inevitably, the Containment Field will begin to weaken, leaking dangerous radiation or reality-warping magic all over the place, and forcing the heroes to drop what they're doing and scramble to restore it (often sacrificing themselves in the process).

Should the heroes fail to restore the field, they may be forced to eject the engine core. Doing so will cripple their ship and leave them defenseless, but it beats certain death by vaporization. In the case of a beastie, it's Final Boss fighting time.

Alternatively they can be used for slightly more mundane but no less vital safety purposes, such as keeping all of the atmosphere in your ship from being sucked out in the event of a hull breach.

Note that engineers in Real Life prefer to design things with "inherent safety" in mind, so that if something goes wrong they shut down - or at least fail in a controlled way rather than explode spectacularly. For example, modern nuclear reactors are designed with the control rods suspended over rather than under the reactor, so that if power is lost to the electromagnets they all fall into the reactor and stop the fission process, rather than out of the reactor to cause a runaway reaction. Redundant safety systems are also encouraged if a process relies on them for safe operation. This can lead to some examples of Containment Fields (especially sci-fi ones) being a case of Artistic License – Engineering but hey, Rule of Cool.

The Containment Field often consists of an energy barrier — similar to Deflector Shields, but on the inside of the ship, and facing inward — though this is not always the case.

A Containment Field is a vital part in many Summoning Rituals.