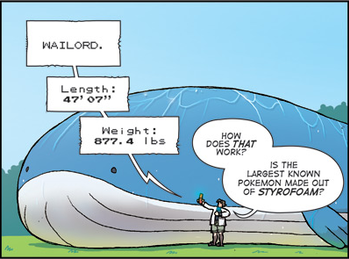 So that's why it's called the "Float Whale" Pokémon.
"54. Do you not realize how much gold actually weighs?"
— The Fantasy Novelist's Exam
Advertisement:

Writers frequently misapply, distort, or outright forget about the concept of density and its implications. This results in such oddities as most metals, including gold, being treated as weighing the same as an equivalent volume of iron or steel, with the possible exceptions of aluminum (famous for weighing less) and lead (famous for weighing a lot). The only thing typically treated as denser than lead is matter from a neutron star, by orders of magnitude — there's apparently nothing in between.

By the same token, anyone can lift as much of a "light" object, such as feathers, Styrofoam, or in the worst cases even stacked flat paper, as can be made practical to carry (though, interestingly, if the paper is in another form, this doesn't seem to apply as much, as characters will frequently acknowledge that stacks of books or newspapers are heavy.)

What's worse, even if the writers get it right, sometimes the actors won't, due to not compensating for the difference between the weight of the prop and the weight of the object it's supposed to represent through acting.

Generally, the only exception to "people carrying around big gold ingots with ease" comes when the density of gold relative to other substances is itself a major plot point. Especially since gold is actually 70% more dense than lead. To say nothing of the fact that gold's status as a dense substance is rather well known; anyone who's ever worn a gold ring can tell that it's heavier than a silver one.

Sometimes an Acceptable Break from Reality, sometimes not. It helps to be in a fantasy setting, and consistency is key. Keep in mind that sometimes reality can make something incredibly boring. (One of the most common house rules for most tabletop games is that gold is weightless because having a weight penalty for your character's money would detract from the fun of the game.) Balloonacy is a subtrope dealing with wild over- and under-estimations of the lifting capacity of Helium, Hydrogen or hot air. Soft Water follows this trope, and Briefcase Full of Money is closely related. In video games, Wallet of Holding (in which a player character is carrying more money than he should be able to lift and/or fit in a reasonably sized purse) is a common invocation.