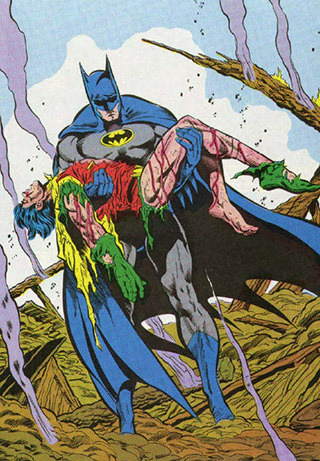 He's dead. Never to be seen again.
"My friend is dead, Patroclus, my dearest friend of all. I loved him, and I killed him... Hector cut him down! I no longer have the will to remain alive among men, not unless Hector loses his life on the point of my spear and pays for despoiling Menoetius' son."
— Achilles, The Iliad
Advertisement:

Killing off a character's closest friend can have serious consequences.

At this point a hero may become much more serious at his work. For a character who already rides the fence between good and evil, this can be enough to totally push them over the edge. And both will sometimes find a way to blame themselves for it. Optional routes are a nervous breakdown, a lifelong vendetta against their killers, and/or a brief retirement. It's likely the hero will take an I Work Alone attitude, at least for a while. In anime this also can occur with the death of partner mons.