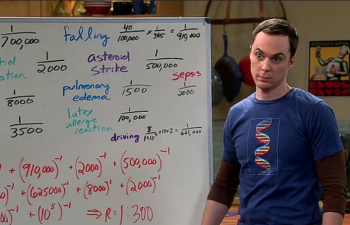 "Could these calculations be simpler?"
"No...now calculate the chances you're getting punched."
"A shame. If you were anything akin to me, perhaps we could've become friends. Then again, you would need an IQ of more than 200 to meet the minimum criteria."
—Bedman to...himself, Guilty Gear: Xrd
Advertisement:

At first glance, Adam the Insufferable Genius appears to be exactly the type who's doomed to learn An Aesop about humility: he's very talented, he knows he's very talented, and he doesn't mind telling you repeatedly what a talented person he is. But the difference between him and your standard-issue loudmouth is that he really IS that good, and when you need someone with his skills to save the day, he always comes through. So you have to concede that at least a little of his arrogance is justified — not enough to make you forget that he's got the social skills of a chainsaw, but enough that you can tolerate his ego if that's what it takes to keep him around. Not that he can't ever be hit with An Aesop of some kind. In particular, every Insufferable Genius constantly runs the risk of humiliation if they ever make a mistake — which they are more or less bound to do eventually, by simple probability theory.

May overlap with Brilliant, but Lazy. Often easily Enraged by Idiocy. Depending on their overall skill and/or hamminess, they may be an Awesome Ego. May join in a Battle of Wits, if anyone is in the right league. Compare Gentleman Snarker, Tall, Dark, and Snarky, Know-Nothing Know-It-All, Too Clever by Half, Bunny-Ears Lawyer, The Proud Elite. Often leads to the grudging conclusion that Jerkass Has a Point. Contrast with characters that do get their Aesop, who may fall quickly or be slowly broken. This character is often given a foil by pairing them with a less intelligent sidekick in a Smart Jerk and Nice Moron pairing. Not often, but they certainly can be an Awesome Ego if their antics are rather entertaining or amusing.

A lot of the time, in some way or another, the Insufferable Genius' inflated ego is merely a facade that compensates for any insecurities or shortcomings, perceived or otherwise. They could also be legitimately delusional and truly believe they're "above" everyone else. If they are aware of their poor reputation and the large amount of people who have serious problems with them, they will often view it as further evidence that they're in the right, with their justification usually being something along the lines of "the strong needn't concern themselves with the opinions of the weak" or "if you're not divisive, you either surround yourself with yes men or have never done anything". If faced with consequences for their behavior, they will almost never accept them or recognize where they went wrong - as far as they're concerned, it's just a case of Tall Poppy Syndrome and/or useless people trying to bring down someone else because they have nothing to offer. Occasionally, they might display a personable and compassionate side of them sometimes along with a deep, dark secret revealing why they're the way they are, in which case they have Big Ego, Hidden Depths. People having the right to boast about themselves doesn't automatically mean there's a reason to do so in such an overt manner, especially if their talents can indeed be backed up. Despite any justification, arrogance is usually indicative of weakness, immaturity, stupidity, poor character and the like; something an Insufferable Genius would be too proud to realize.

Also contrast with Gentleman and a Scholar (whose intelligence does not prevent him from being gracious, friendly, and polite), Small Name, Big Ego (who thinks he's an Insufferable Genius but is merely Insufferable, if not an Insufferable Imbecile) and Academic Alpha Bitch (who is the high school version of the Insufferable Genius and feels the need to order the school to her specifications). See Kindhearted Simpleton which is the opposite of this trope. Compare Rightly Self-Righteous if it's the character who is morally right despite how condescending they are. Compare also Smug Super, whose ego comes from personal strength instead of intelligence. See Tall Poppy Syndrome for how they're often reacted to.