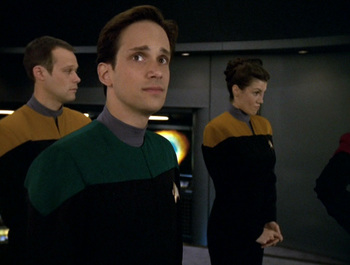 From left to right: Crewmen Mortimer Harren, William Telfer and Tal Celes, all hand-picked for Janeway's latest away mission. And don't they look just thrilled.
A Lower-Deck Episode featuring three crewpeople who are apparently close to the top of Seven's list of problem crew! Crewman Mortimer Harren in the Engineering department seems to be a slacker though he has five degrees, William Telfer, in sciences, is a hypochondriac; and Tal Celes, a Bajoran analyst in Astrometrics, is consistently error-prone. But they've never been on an away mission... Janeway takes it upon herself, as is her duty, to help these three who have slipped through the cracks.