Film / The Squid and the Whale 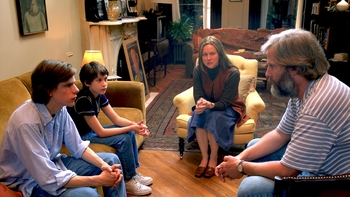 Joint custody blows.
"Me and Mom versus you and Dad."
—Frank, in the film's opening linenote in the context of a tennis game, but with very overt connotations
Advertisement:

The Squid and the Whale is a 2005 American independent comedy-drama film written and directed by Noah Baumbach and co-produced by Wes Anderson. The film marked the second collaboration between the two following Baumbach co-writing Anderson's then-latest film, The Life Aquatic with Steve Zissou. It stars Jeff Daniels, Laura Linney, Jesse Eisenberg, and Owen Kline, with Anna Paquin and William Baldwin in supporting roles. The film was shot on Super 16mm and mostly on handheld, creating its distinct lo-fi look.

The film revolves around a family in mid-1980s Brooklyn — the Berkmans, composed of established writer father Bernard (Daniels), up-and-coming writer mother Joan (Linney), and sons Walt (Eisenberg) and Frank (Kline). Based primarily on events in Baumbach's own adolescence, the center of the story is the parents' gradual divorce, and how this manifests in the family members' connections and personal lives.

Primarily off the strength of its universally acclaimed screenplay, the film won several awards at the 2005 Sundance Film Festival, and collected Baumbach's first big-name nominations for Independent Spirit Awards, Golden Globes, and an Academy Award.