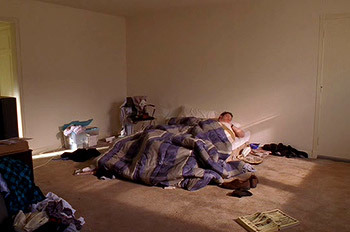 A picture says a thousand words, and an empty, sparsely furnished apartment says a lot about the lonely soul who lives there. No art on the walls, hardly any food in the fridge, very little furniture (probably just a mattress on the floor to sleep on).

These guys either don't have much disposable income or have other priorities like a big TV or gaming rig. They would prefer to do as little housework as possible, or simply can't keep house because they never learned how. The fridge contains only the basics or nothing at all, or food supplies are not replenished until they can walk out by themselves. They like having lots of open space around. Or to put it another way, in fiction women want their apartment to be cozy and welcoming to guests. Men want their apartment to be utilitarian and welcoming to themselves.

Note that while this trope does happen more frequently with men, it isn't exclusive to men - the phrase "bachelor pad" has been gender-neutral for years now.

Related to Soulless Bedroom, where a lack of furniture and decorations in the bedroom indicates an emotionless person. Contrast with Feng Schwing, where a bachelor pad is made for seduction. Unrelated to Ascetic Aesthetic, where the décor is stylishly minimalistic. See also Horrible Housing. May involve Trash of the Titans.