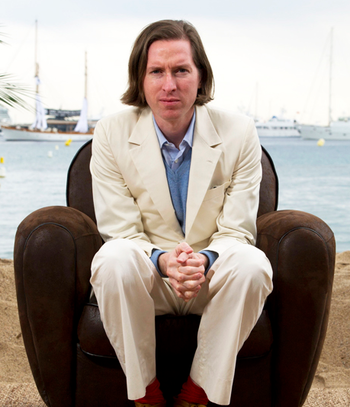 "I want to try not to repeat myself. But then I seem to do it continuously in my films. It's not something I make any effort to do. I just want to make films that are personal, but interesting to an audience. I feel I get criticized for style over substance, and for details that get in the way of the characters. But every decision I make is how to bring those characters forward."
Advertisement:

He specializes in weird and quirky comedies loaded up on dysfunctional characters (usually whole families of them) that typically deal with themes of Parental Abandonment. He often has the same actors in his movies and uses the same techniques, including highlighting ornate background details and symmetrical settings, using wide-angle anamorphic lenses, and ending on a slow-motion shot, resulting in a very distinctive Signature Style that makes it very clear that you’re watching a film by him.

Wes Anderson's work. Scorsese even believes him to be "the next Martin Scorsese". His first eight films are part of The Criterion Collection.

He's not Jeff Mangum, believe it or not.

You can now vote for your favourite Wes Anderson flick HERE!

Wes Anderson and his works provide examples of: