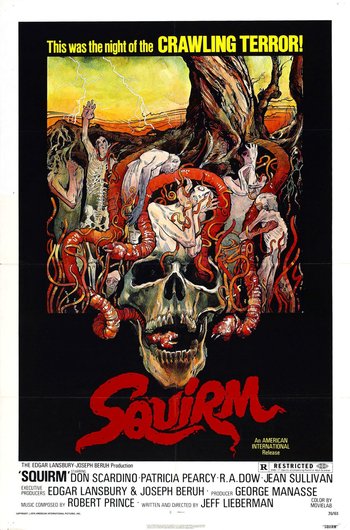 Will the movie be half as exciting as this poster? We won't say; it'd spawl the zoo-prize.
Advertisement:

Filmed in 1976, Squirm is the tale of a Love Triangle between: Geri, a small-town Georgia girl; Mick, the city boy who wants to "examine her antiques"; and Roger, the local boy who's dissatisfied with his lot in life. More importantly, it's about the gigantic swarm of electricity-maddened earthworms that seek to tear them apart...literally.

It was directed by Jeff Lieberman, who also did the backwoods slasher Just Before Dawn, drugsploitation flick Blue Sunshine, Satan's Little Helper and wrote the screenplay to The Neverending Story III.