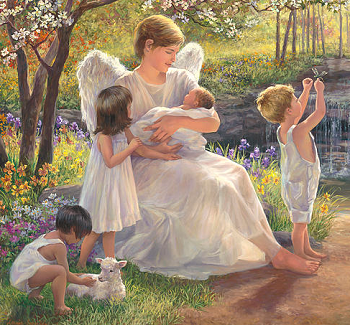 Victorian-era Anglosphere invented modern "childhood". Inspired by the ideals of The Enlightenment and an interpretation of The Bible's New Testament based on them, they came to the conclusion that the time people spent between being a baby and being useful in mines and fields (or for making more babies) was special and precious — that people this age were innocent and full of wonder and beloved by God, and that they should be loved and protected and cared for by society in general. They came to believe that there was a stark contrast between the innocent and instinctual goodness of children and the cynical evil of adults. After several decades the grassroots belief in and support for "childhood" became so strong that childrennote  Or more usually, failing that, just the girls under certain ages were actually forbidden from doing certain types of work despite the dedicated lobbying of business interests who didn't want to lose their smallest and cheapest workers (e.g. smaller coal-miners mean smaller mineshafts). By 1900 only a fifth or so of British and US children (under 16) were in full-time employment and even the world's most pro-corporation and rabidly anti-socialist democratic state, the USA, actually finally banned child labour entirely

The age European culture has assigned to the end of "childhood" has grown over the years and an "inbetween" period was added in The '50s or so — "teenage-hood" — but the meme remains: a child is a Blank Slate not yet sullied by the evils of the world. Only upon coming of age do they lose this innocence and the protection it confers. A child's death, even that of a boy, is a tragedy; but a young man just a year older than him is in the most expendable demographic in the world.

The Children Are Innocent trope captures the idea that children are never naturally evil. A consequence is that harming one is the ultimate evil act, no matter how provoked — unless that is forcing others to harm them. This is an extremely pervasive trope that is at the heart of many other tropes, such as Friend to All Children and Harmful to Minors as well as frequently the root of both Papa Wolf and Mama Bear. When the Big Bad kills nameless hundreds, the heroes will say the villain killed women and children. The Children Are Innocent trope is old enough that it is difficult to assign it an age; but at the minimum it goes back to the New Testament.

Expect those who buy into this trope to hold that any villain character Used to Be a Sweet Kid until something bad happened to them, especially if they also believe that Rousseau Was Right. Sometimes that "something bad" is as simple as puberty and thus "worldly experience" which again ties into the New Testament stuff.

Off-stage children almost always fall under this trope; like some legal systems, children are "innocent until proven guilty". Being informed that a character has killed, injured, exploited, etc. children is always a mark of evil without such proof. Indeed, one of the commonest ways to disprove Always Chaotic Evil is to bring up their children, as in the Genocide Dilemma. For instance, nothing makes a "heroic" human adventurer look more villainous than an Empathy Doll Shot in a decimated goblin village.

Where blond hair is found naturally, children are often depicted with it. This trope is considered to drive Hair of Gold, Heart of Gold because children (and the young) are more likely to have blond hair than older people, thus blond hair is a sign of innocence.

This is the standard for an Innocent Prodigy and often comes into play for A Child Shall Lead Them. Innocence is also generally behind Constantly Curious, Curious as a Monkey, and Cheerful Child.

Frequently children Cannot Tell a Lie because they are too innocent to think of suppressing the truth. Children who do start to lie often show this is new to them by being momentually Bad Liars. On the other hand, this very quality can lead to their being Too Dumb to Fool.

Part and parcel of this is depicting children as the other meaning of innocent: naive, gullible, and too trusting. They can misunderstand anything other than the most obvious. This can lead to an unawareness that they're doing anything wrong. They can commit offenses unwittingly and face a Bewildering Punishment. Children have to learn empathy, and not to be self-centered, and also often have a poor grasp of consequences of their actions. This can then lead to Ambiguous Innocence.

In contrast, the Creepy Child, the Enfante Terrible, and Corruption by a Minor draw much of their force from their knowingness. They understand as much, if not more, than the adults about them, which contradicts not only this trope but the general understanding of children. A Serial Killer can give anyone the chills but the effect is magnified if the killer is a child.

The Spoiled Brat, the Mouthy Kid, the Bratty Half-Pint, and Kids Are Cruel can be complex examples. They may have been born that way, have been this trope and then something happened to them to remove that aspect, or they could have a Hidden Heart of Gold which restores the aspect. In the first case, if the causes of the spoiling are clearly identified, and the children revert to innocence when they are removed, the children may still be innocent.

Teenage Wasteland is a similar case; since children now have adult power and responsibility despite still being children, the forced loss of innocence may be a major theme. Ironically, it is reinforced by a Childless Dystopia, what with how miserable things generally become without them.

Subtrope for Children Are Special. In this case, it is their innocence that makes them special.

Amnesiacs are Innocent is based on a similar idea. The Amnesiacs has returned to the Blank Slate status of a child because they've lost all the worldly experience that made them lose it.

See also Sweet Sheep and Bambification for the animal kingdom's equivalent to this trope.

In Season 4 "My Big Fat Greek Bob", Linda allows Gretchen to host her "Lady Goods" party at her home. But when she realizes she selling vibrators, Linda sends her kids to their room.

In Season 4 "My Big Fat Greek Bob", Linda allows Gretchen to host her "Lady Goods" party at her home. But when she realizes she selling vibrators, Linda sends her kids to their room.