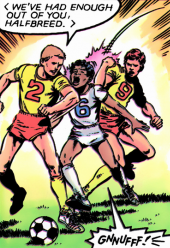 The Indians said I was white by law
The White Man always called me "Indian Squaw"
— Cher, "Half Breed"
Advertisement:

So, you just happen to be the child of that army guy who went native and married The Chief's Daughter? Or perhaps the reverse applies and dear mum left home and joined dad on the ancestral family homestead back in rural Smalltownington. This of course is assuming both your parents are alive and love each other (Star-Crossed Lovers have a tendency to have it rough). You might, after all, be the product of accidental affairs, or worse yet, rape. And then you were born. Congratulations, you are now guaranteed to be despised by one or both sides of your family. Maybe it was that time you wore the ritual face paint to Sunday school...

The Moral Guardians of the local town have branded you the "Half-Breed." ("Half-caste" is a roughly synonymous term.)

Lucky for you, you (hopefully) have the love and support of your immediate family, and if you had a shaman/witch-doctor/priestess in the family genes, you can most assuredly tell them where to stick their supremacist ideologies by unleashing the can of mystical whup-ass. Conversely, you may need to give the other side of the family the can of whup-ass if the tribe never accepts you as one of them, but let's not dwell.

Life may be difficult. If you bear a closer resemblance to one parent over the other, you might tend to stick out like a sore thumb. Fortunately, genetics is probably on your side. Not only are you likely to possess an exotic attractiveness, you may even have the ability to pass as either race at any given time.

A word of caution: any revelation of your parentage might bring down the wrath of a mob wielding Torches and Pitchforks of doom at any given moment. Always have an escape plan ready, even if it requires mass carnage. Hence this trope can result in, or can be the result of, Hiding Your Heritage.

If you happen to live in a fantasy or scifi world, you're probably a Half-Human Hybrid. Here's to hoping you at least have five fully functioning limbs. More specifically, if one of your parents happens to be an elf, then congratulations you are a half-elf who will be hated and despised by your "superior" elven family. If you're a half-orc, half-ogre or similar, you're likely even worse off, especially if your parents races are at war, so either side may see only the blood of the enemy in you — or, as tactfully used to describe half-orcs, "their existence implies an interesting backstory that most would not like to dwell on." See also Raised by Natives.

Subtrope of Child of Two Worlds and Contempt Crossfire. Compare Maligned Mixed Marriage. And possibly, That Thing Is Not My Child!. Contrast But Not Too Black and But Not Too Foreign, in which people with mixed ancestry are treated better than ones who have only minority or foreign ancestry, as well as the One-Drop Rule, in which this ancestry is so far back on the family tree that nothing remains visible of it, and yet still causes this kind of harsh treatment. Compare and contrast Mixed Ancestry is Attractive, since fetishization often goes hand-in-hand with prejudice. See also Hybrids Are a Crapshoot, which may exacerbate this trope and/or add a layer of nuance to the anti-hybrid side.

The "tragic mulatto" is an old trope of period literature, and involves a character of mixed white and black or other ethnic ancestry who's not accepted by his or her community, often with tragic results.

Please note that in Real Life the terms half-breed and half-caste are highly offensive. "Mixed" is the most common everyday term, with "mixed-race" or "biracial" being used academically, but it varies by culture and individual.

Fantasy (or soft Science Fiction) works may include hybrids of different species, mostly Half Human Hybrids, sometimes Nonhuman Humanoid Hybrids. In these non-human or half-human cases, often overlaps with Half-Breed Angst, which focuses on internal rather than external conflict.