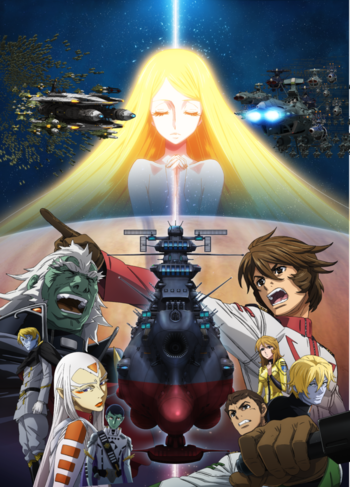 Space Battleship Yamato 2202: Warriors of Love (also marketed as Star Blazers 2202), is the follow-up to the critically-successful re-imagining of the original Space Battleship Yamato series. Like its predecessor it adapts a classic Yamato arc for a new era and new generation of viewers — in this case, the events of Yamato 2 and Arrivedeci Yamato.

It is three years after the Terran-Gamilas war, and thanks to the Cosmo Reverser brought back by the Yamato Earth's enviromment has mostly recovered. And while Earth has entered into an alliance with Gamilas, things have been mostly peaceful in the Solar System. The Yamato has been monthballed pending modernization, while its crew has been dispersed to share their experience among the burgeoning Space Force.

But some threats still remain. Gamilas' ancient foe, the Gatlanteans, still haunt the edges of civilized space, and with Earth now finds itself dragged into this conflict, whose stakes are higher than anyone in Yamato's veteran crew could have ever imagined.

Much like its predecessor, Yamato 2202 was first released as a set of movies, with the first one premiered in theaters in February 25, 2017. This was then followed by limited-release DVD and Blu-ray, before the series was finally aired in entirety as a 26-episode TV anime from October 2018 to March 2019. It was Studio XEBEC's final series.