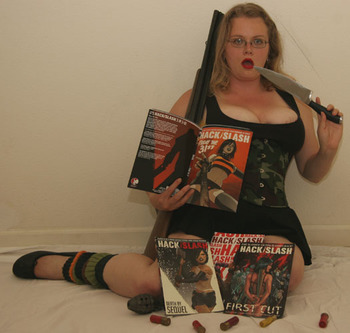 Seanan McGuire is an American writer and singer-songwriter.

McGuire is the current record holder of the most Hugo Award nominations in a single year, racking up five (and winning one) in 2013. Her October Daye series has made her a New York Times Bestselling Author as well. She also writes under the pseudonym Mira Grant.

In addition to her many prose novels, McGuire also writes comic books for Marvel. In 2018, she became the new ongoing writer of Spider-Gwen, and scripted the Mystique segment of X-Men: Black, as well as an X-Men: Gold annual. As part of the Age of X-Man crossover event, she wrote the tie-in series The Amazing Nightcrawler.

As a singer-songwriter in the filk genre, McGuire has released five albums to date.

, though it seems to have not been updated in a while. Her blog

is more up-to-date, and she regularly posts on Tumblr

. A full list of all her written works is available here

as A. Deborah Baker