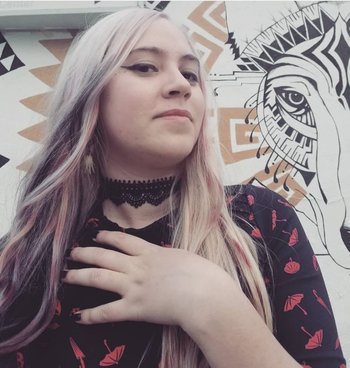 " I don't know if there's ever a better strategy for growing a following other than being very passionate and ambitious. People respond to passion more than you'd think!"
Advertisement:

Vivienne Maree Medrano (born October 28, 1992 in Maryland), better known online as VivziePop, is a Salvadoran-American animator and cartoonist who is known for being the creator of the webcomic Zoophobia, as well as the Horror Comedy musical shows Hazbin Hotel and Helluva Boss. Vivienne studied at the School of Visual Arts in New York City and graduated in 2014, and is the founder of SpindleHorse Toons.

Tropes Vivzie Has Used In Her Works