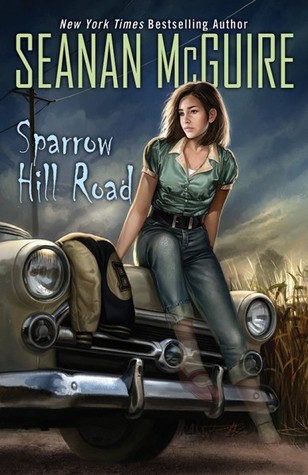 Phantom prom date
"I hate ghost stories. Too many of them are autobiographical."
Advertisement:

Rose Marshall is the Shadow of Sparrow Hill Road. She's the Lady in Green. She's the Phantom Prom Date.

Ghost Roads (previously Ghost Stories) is a series of short stories (later collected into a novel) by Seanan McGuire about a ghost named Rose Marshall, who crashed and burned on Sparrow Hill Road in 1952 and has been hitching the ghost roads ever since as an occasional psychopomp, trying to help wayward souls she meets along the way...and to get revenge for her own murder. Sparrow Hill Road is the first book in the now titled "Ghost Roads" Series. A sequel, titled The Girl in the Green Silk Gown was released on July 17, 2018. Book 3, Angel of the Overpass, was released on May 11, 2021. There's also a short story, "Train Yard Blues", published in the anthology Coins of Chaos and another, "Last Call at the Last Chance", available on the author's Patreon

The stories are based on the various Urban Legends about Hitchhiking ghosts and on songs about roads, cars, dates, and broken hearts. Rose also has a lot to say about road culture, car culture, date culture and diner culture along the way.

The series originated as 12 short stories published online at www.edgeofpropinquity.net over the course of 2010 as monthly installments:

It only remained online for one year, though "Good Girls Go to Heaven" is still available at the author's web site

Revised versions of these stories (except "Bad Moon Rising") were collected into a novel, Sparrow Hill Road, which was released in 2014.

As one might suspect from the story titles, music plays an important role in Rose Marshall's story, as Seanan McGuire is also a musician and songwriter. Rose has been the subject of several of her songs, including "Pretty Little Dead Girl", "Graveyard Rose", "Waxen Wings", "When I Drive", "Counting Crows", "Hanging Tree", and "On Dead Man's Hill". Note that these songs mostly represent the Urban Legend version of Rose so they don't correspond exactly with the stories. You can read the lyrics on her website, or on the InCryptid Wiki

The sheriff said she'd been doing ninety
Along the edge of the ravine;
Two sets of tracks — but here's the strange thing —
The other car was never seen.
Whoever clipped Rose, well, they got away clean.