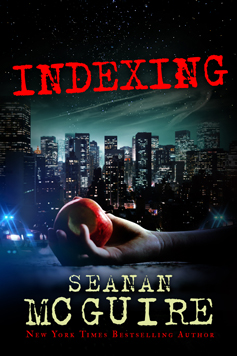 Hope they find you before The Story does.

Indexing is both the first in a series of ebook serials by Seanan McGuire, and the name of the series itself. Its books were originally released in parts on Amazon Kindle, now available as a single complete work.

The entries in the series are:

It is about an organization who save ordinary people from being sucked into the narrative of fairy tales. Why is there an organization? Why do ordinary people need saving from fairy tales? Because contrary to what Disney would have us believe fairy tales often have a whole lot of collateral damage, and a fairly high body count. Even the princes and princesses who are theoretically slated for a happily ever after ending often end up dead when the story tries to play out in real life.

How is it there are people who know when a Story is starting and who needs saving? The ATI Management Bureau is made up of people who were touched by The Story and survived.