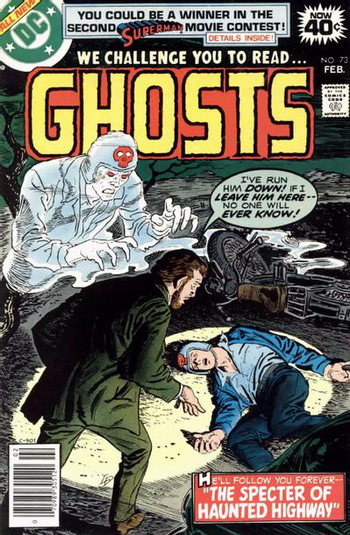 "You're dead, McNab. You're even deader than I am."
— Roger Mortis, Dead Heat
Advertisement:

In mythology and folklore, a vengeful ghost or vengeful spirit is said to be the spirit of a deceased person who returns from the afterlife to seek revenge for a cruel, unnatural or unfair death. In certain cultures where funeral and burial or cremation ceremonies are important, such vengeful spirits may also be considered as unhappy ghosts of individuals who have not been given a proper funeral. In Japan, these kind of spirits receive the name of onryou (怨霊, lit. "hateful spirit") and are a type of yuurei (幽霊, lit. "dim spirit"), a type of Youkai and the equivalent of ghosts in the West. Typically a Ghastly Ghost, at least from the point of view of those who did them wrong.

In most cases, the object of a vengelful ghost's revenge is always a living person, or at least a deceased one whose spirit the ghost wants to forcibly drag to hell. But for whatever reason, said person rarely ever comes back as another ghost once his ghostly pursuer kills them, and the chances of that ghost seeking revenge on the other vengeful ghost and possibly perpetuating a Cycle of Revenge are likewise extremely slim in fiction. When the writer addresses this scenario, expect some Hand Wave or justification as to why it doesn't occur — such as the universe having specific rules concerning who gets to become a ghost (which the victim naturally won't meet), vengeful ghosts being far stronger than recently deceased spirits due to age, or the latter having cannibalistic tendencies on top of being extremely bloodthirsy.

Part of Our Ghosts Are Different and Revenge Tropes. Sister Trope to Onryo, a Japanese counterpart to this trope that has distinctive traits but the same objective, and Revenant Zombie, in which the person returns as a zombie but keeps all their memories and personality, including the memory of the one who killed them and the desire for vengeance.

See also Unfinished Business, when revenge is not the (only) reason to come back as a ghost, Ghostly Goals, for when the primary mission of the ghost is revenge, and Murder Into Malevolence, a reason for why the ghost can turn violent after the death. If this is a reveal in a murder mystery, it may overlap with The Dead Guy Did It.