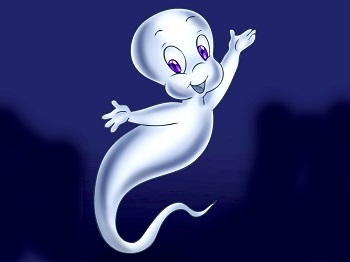 As You Know, ghosts are scary. Perhaps it is the thought of the soul of the dead that doesn't stay dead, perhaps it's because nonliving things aren't supposed to move on their own, or perhaps the afterlife doesn't like them. Whatever the case, we think ghosts are out to harm us, and thus they tend to be portrayed as actively hostile. Not to mention how we attribute our bad luck or strange things happening in a place to mischievous ghosts, and how ghosts have a reputation of being vengeful or liking to possess someone.

Friendly Ghosts ain't any of those. They're friendly, helpful, and will talk to anyone. They may or may not be frightening in looks, which may strain their friendly nature. This can show that ghosts are Not Always Evil.

The Trope Namer is Casper the Friendly Ghost, who is also the Trope Codifier. Can lead to an Otherworldly Communication Failure when characters fail to recognize a ghost's benign nature.