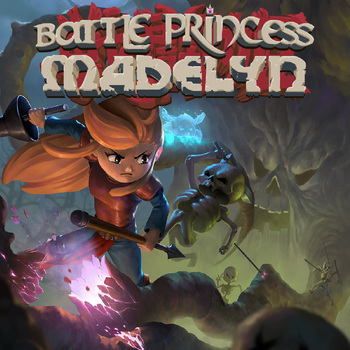 Battle Princess Madelyn is a 2018 action-adventure game by Causal Bit Games for PC, Nintendo Switch, Xbox One, and Playstation 4. It chronicles the journey of a young knight-in-training who sets out to rescue her family from the forces of evil, and avenge the death of her beloved pet dog, Fritzy. Accompanying Madelyn in her quest is...well, Fritzy, who returns to Madelyn's side as a ghost.

Almost universally described as a spiritual successor to Capcom's classic Ghosts 'n Goblins series of games, Battle Princess Madelyn melds the former's arcade action with a running narrative and a more open, exploration-focused design. However, for those who wish to skip the story and gun for a high score, the game has an Arcade Mode for that purpose. A patch issued in March 2019 added "King Daddy" mode, an ultra-difficult variation of Arcade Mode, and a Boss Rush mode.

In January 2020, Causal Bit Games teamed up with publisher Limited Run Games to release the Nintendo Switch-exclusive Battle Princess Madelyn: Royal Edition, which discards the Story Mode entirely in favor of expanding the Arcade Mode, which creator Chris Obritsch notes is much closer to the game he originally conceived.

Battle Princess Madelyn makes use of the following tropes: