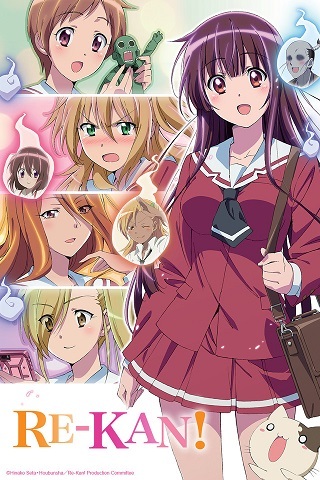 Re-Kan is a Japanese yonkoma manga series by Hinako Seta, serialized in Houbunsha's Manga Time Jumbo magazine. Re-Kan! was first published as a one-shot in Manga Time Jumbo '​s December 2009 issue, and it later began serialization with the February 2010 issue. It has been collected into four tankōbon volumes. An anime television series adaptation by Pierrot+ began airing April 2, 2015.

Hibiki Amami is an odd girl who can see ghosts and otherworldly things, as well as talk to animals! Originally a Yonkoma, it has received an anime adaptation as part of the Spring 2015 Anime lineup.

The show is available on Crunchyroll here

and on Hulu here

for people in the US and Canada.

Has an in-progress character page that needs a lot more love.

Not to be confused with Rin Ne, another show about seeing ghosts whose anime adaptation aired in the same season.