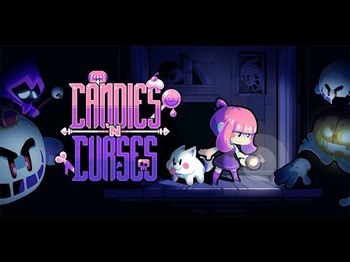 Mollie Pop, our brave hero, sped toward the forest that borders her cozy suburban neighborhood. But why would she go to such a dark and dreary place, you might ask? A dare gone too far, proposed by her rambunctious friends, has pushed young Molli over the edge.
Advertisement:

Candies 'n Curses is an arcade rogue-lite game developed by Tako Boy Studios. It was published for mobile devices on October 31st, 2018.

The story starts with Molli playing Truth or Dare with her friends. Molli is dared to visit a house that is rumored to be haunted. They intended it as a joke, but the brave Molli is eager to accept the challenge. Once she enters, the door shuts behind her, leaving her trapped and surrounded by ghosts, with only her flashlight to protect her.

To progress through the game, the player travels through different rooms, running and jumping between floors to vanquish ghosts with her flashlight. They can also collect charms which can be attached to the flashlight for various perks, and find treasure rooms with randomized candies or curses to give the player a fighting chance in future rooms.