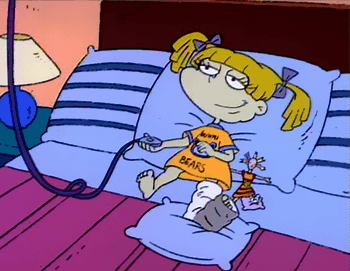 This is a plot that focuses on a limb (that is, an arm or a leg, or in the case of some creatures, a wing or flipper), being injured. This can involve it being broken, sprained (ankles are a popular area for spraining for some reason), or dislocated, but minor injuries (such as grazing one's knee) don't count.

Usually, if it's an arm it means the person can't move that arm or has great difficulty doing so, and if it's a leg that means the person can't walk or has limited mobility. This makes it a popular plot device for rendering someone unable to dance or do sports, meaning someone has to sub for them. And it also makes it a popular injury to fake for the sake of Prank Injuries if they want to get attention or be lazy. In the case of legs, it can also lead to someone having to stay in one place, which can lead to situations such as a "Rear Window" Homage.

Oftentimes, the injury happens with the character falling and then shouting "Ow, My Body Part!". Then, they think they're OK, but cry out in pain when they try to use the limb, then they go to the doctor and say that the limb is broken/sprained/etc and not to use it for X amount of time. If it is broken, there might be a Sickening "Crunch!", and in any case, when Played for Drama, it might lead to I Will Only Slow You Down.

If it's an animal with the injury, there will usually be one or more worried humans nursing the animal back to health and, in the case of wild animals, keeping the animal until it can walk or fly again.

Can be enforced on TV shows as a result of a Written-In Infirmity when the actor/actress has a limb injury and they write it into the plot.

Compare An Arm and a Leg and its subtrope Literal Disarming for when the limbs get outright cut off. It might lead to an Injured Player Character Stage if it's in a video game. If it's a foot or a digit that's injured, then it's Agony of the Feet or Fingore.

Haruka sprains her ankle while trying out ballet tricks she's not ready.

Haruka sprains her ankle while trying out ballet tricks she's not ready.