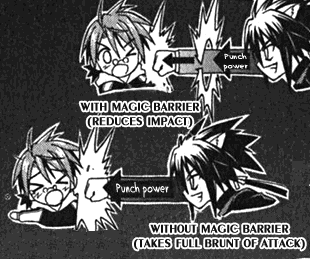 ...or you could, you know, dodge.
Advertisement:

Put simply, Damage Reduction (often abbreviated "DR") is an indication of how much physical damage a character sucks up before it actually starts to subtract from their Hit Points.

Though used primarily in Role-Playing Games, DR can be found across many different media. In games, DR typically is the very first thing calculated, right after base damage is assigned, and before any multiplicative or additional damages are added into the equation.

In most Tabletop RPGs, this usually tops out at numbers less than 10, since even 30 damage in pen-and-paper games is enough to kill most low-to-mid-level, non-fighter characters. Electronic and MMORPGs on the other hand, can easily have DR hitting double or even triple digits.

Most systems with a DR mechanic are also systems without Scratch Damage, which means the target cannot be hurt at all if the attacker can't overcome the DR.

One very important to note is that, most of the time, DR reduces only physical damage — that means that, typically, there are one or more ways to get around a DR-based Damage Sponge: Elemental Powers almost always bypass DR, and if Magic Damage is different than Physical Damage, suddenly spamming the hell outta Magic Missile seems like a really, really good idea. Even if neither exist in the setting certain weapons or environment hazards can bypass the effect. DR can also manifest in different types, making some enemies very resistant against magic but weak to physical attacks and so on. Attacks that are specifically designed to ignore Damage Reduction tend to be Armor Piercing Attacks.

The Trope Maker here is a little hard to place, as many/most Tabletop Games miniatures games use some sort of Armor Rating to reduce damage, but the Trope Codifier is without a doubt Dungeons & Dragons (third Ed and above), which uses it to a large extent, and is responsible for the tradition of "magic fire beats DR."