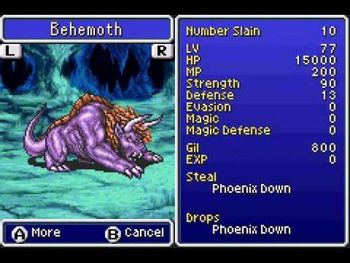 Also called a "monster encyclopedia" or "bestiary", this is a feature of various RPGs that allows you to review the types of enemies, monsters, and beasts (if not more) that you've encountered, battled, and slain throughout your quest. Related to the Enemy Scan, except that while the Scan is a tool you use during actual combat, the Monster Compendium is a reference guide for you to peruse later at your discretion.

The amount of actual information shown on a given Monster Compendium page varies from game to game; it can range from mere Flavor Text to a full blueprint of the enemy's statistics (including elemental affinities, money and item drops), possibly even tips for battling them more easily. Occasionally, you may gain the ability to summon the said enemies or utilize their powers by filling in a Monster Compendium page.

As a rule of thumb, Monster Compendiums always start as an empty book, with information on each monster appearing only after you've encountered a monster "in the wild" (this avoids spoiling the player about future monsters or, especially, Boss Battles to come). Sometimes you must actually slay the beast before it will appear on the Compendium's pages, or you need to register it by using the Enemy Scan; on the other hand, sometimes merely spotting the beast on the field is enough to unlock its corresponding Compendium entry. In some games, the Monster Compendium will unlock only a partial entry at first, and you'll need to repeat the unlock (possibly multiple times) to reveal the full entry. There may also be different unlock requirements for different pieces of information. For example, loot that Randomly Drops may be listed only after successfully receiving it.

Achieving 100% Completion on a Monster Compendium (i.e. registering every enemy type in the entire game) is tough work — some monsters, like the Metal Slime, are naturally elusive and thus difficult to register an entry for (especially when you have to successfully defeat them); different variations of the same monster archetype might have different Compendium entries; and some monsters only appear in specific places (or times) requiring the player to really search to find them. Most annoyingly some Compendium entries are permanently missable if they aren't scanned or slain (or otherwise registered) at the first opportunity you get to do so. Fortunately, completing the Compendium is always optional, although some games may actually reward the player (in some manner) for full completion.

Often part of a much broader Lore Codex. In horror-flavored works, the Compendium may be something of a Tome of Eldritch Lore, because the creatures it describes tend to be pretty darned eldritch. The Monster Compendium is a commonly added feature of a Video Game Remake if the original version didn't have one to begin with; it's also one element that generally carries over to a New Game+. See also All There in the Manual.

The Musee Champignon has a section for the Folded Soldiers of each area.

The Musee Champignon has a section for the Folded Soldiers of each area.