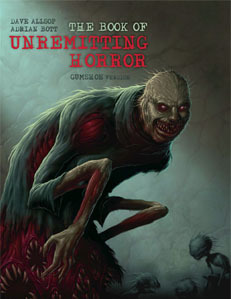 The Book of Unremitting Horror was originally a d20 System supplement which detailed the horrific entities of the "Outer Dark Mythos". This was subsequently incorporated into the background of both The Esoterrorists and Fear Itself, which both use the GUMSHOE rules system, and so the second edition of the supplement, using GUMSHOE rules mechanics, serves as a supplement for both those games.

The Book of Unremitting Horror provides examples of: