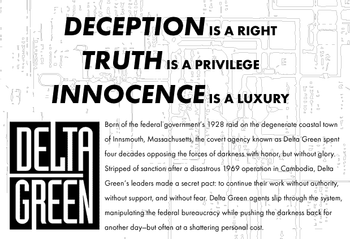 Welcome to your new job, rookie.
We travel light, we probe deep, and we strike hard. We're Delta Green, and we may be outlaws and cowboys and fools, but we've kept this green ball of shit safe and sound for longer than most people have been alive.
— Reginald Fairfield
Advertisement:

An acclaimed sourcebook for the famous Call of Cthulhu tabletop roleplaying game, which would later become its own standalone game. Delta Green tells the story of the eponymous organization, a secret United States agency born of the Federal raid on Innsmouth, Massachusetts in 1928 and tasked to protect the country from paranormal threats. After an operation gone horribly wrong in Cambodia in 1969, Delta Green was officially shut down — but its leaders, aware of the things lurking in the cracks of reality, continued the fight illegally, stealing resources from the government, carefully picking new members from the federal agents community, and generally acting like rightfully pissed off Cowboy Cops in their battle against the Unnatural. Not until the 1994 assassination of Major General Reginald Fairfield, Delta Green's de facto leader, would it take up its current incarnation: a deeply hidden conspiracy in the labyrinthine world of the United States federal agencies, structured in semi-independent cells.

The new Delta Green was released in 2016 and advanced the plot. After a series of operations against the mi-go and The Greys, Delta Green delivers a huge blow to MAJESTIC-12, coinciding with the total reorganization of the US intelligence community after 9/11 attacks. Delta Green is reactivated, brought back into government fold, given a proper budget, and, using The War on Terror as their new cover, returns as "The Program". Some old members refuse to go official and decide to keep the old group running. Nicknamed "The Outlaws", this group acts more like the old Delta Green, as an illegal and unauthorized conspiracy.

Delta Green is heavily based on classical conspiracy/UFO theories, meshing them with the Cthulhu Mythos milieu: DG themselves are a spin on The Men in Black, but there are also other shadow agencies involved, including the now famous Majestic 12 group that deals with The Greys (actually mi-go in disguise). Other players are the Karotechia, occultist Nazis serving an "ascended" Hitler; the Fate, a criminal organization that makes heavy use of Mythos creatures and spells for fun and profit; SaucerWatch, a naïve yet well-funded UFO research group that may be closer to the truth than they know; and the Cult of Transcendence, among others.

The tone of the book is even bleaker than standard CoC: where the basic game has investigators struggling against Mythos creatures and the cultists that serve them (and DG does include its fair share of fighting against these forces), the primary adversaries are evil and/or utterly amoral humans that use (or at least attempt to use) the forces of the Mythos for their own benefit, and are becoming as amoral as them. The Stars are Coming Right, and there may not be anything that Delta Green, or anyone else can do about it...

But it doesn't mean they have to make things easy for them.

In late 2015, a Kickstarter was held for a new series of Delta Green sourcebooks. It reached 10 times its expected goal for a total of $300,000 received, and new material has been released since 2016. The creators have released a PDF copy of a quick start guide, Need to Know for free on their official website.

In 2018 Pelgrane Press of Trail of Cthulhu, 13th Age and The Esoterrorists fame released a prequel named The Fall of DELTA GREEN, using Pelgrane's own GUMSHOE system and focused on the The '60s and The Vietnam War up to the fateful operation in Cambodia that lead to the fall of DELTA GREEN.

For the other, slightly less depressing, slightly funnier Lovecraft-meets-spy-fiction setting, see The Laundry Files and its own RPG, which also uses the Basic Role-Playing system, The Laundry. Other spy/Lovecraft settings for CoC include Achtung! Cthulhu from Mōdiphiüs Entertainment and World War Cthulhu from Cubicle 7.