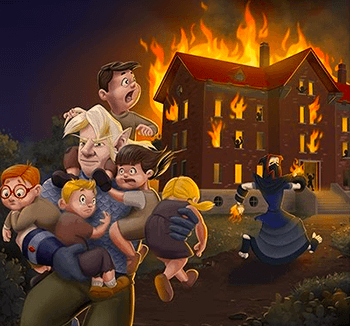 "Listen, like I told your captain, that orphanage attacked me! It was self-defense!"
— Richard, Looking for Group
Advertisement:

What can be more completely and pointlessly evil? Burning down an orphanage, of course! Besides, burning harmless orphans have an enjoyable smell.

This is very, very rarely positive; the only way it can be is if it's an Orphanage of Fear, particularly if the fire-setter is someone who lived and suffered there and has chosen to Let the Past Burn — hopefully having made sure that everyone gets out alive. Then again, such an act is sometimes used as a Bloodbath Villain Origin in which case the character may not be too concerned about who gets out alive (particularly if the other kids were cruel to them), and the management usually makes it so some of the orphans are unable to escape the fire.

Compare Would Hurt a Child.