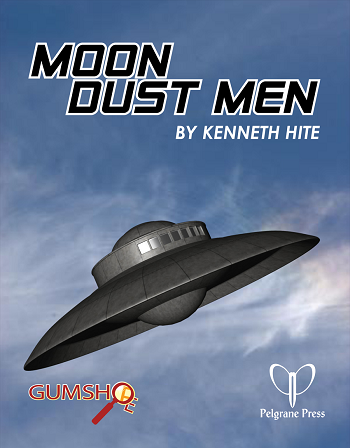 Moon Dust Men is a campaign frame for the GUMSHOE Universal System written by Kenneth Hite and published by Pelgrane Press as part of the Ken Writes About Stuff series.

In Moon Dust Men, players assumes the role of characters inducted into Project Moon Dust, a secretive organisation born out of genuine paranoia in the US over UFOs and their alien pilots. President Dwight D. Eisenhower established Project Moon Dust in 1953 to locate, contain, and coordinate everything known about the alien presence on Earth. The Moon Dust Men travel the world, knowing the truth is out there somewhere and if you don't find it first, the Russians definitely will.

This campaign frame is set in the late 70s world of extraterrestrial cover-ups, Men in Black, and bell-bottom flares. It deliberately focuses at ground level: on the immediate investigation of a crash, anomaly or event. Individual scenarios can turn into a black-tech Cold War or a secret high-octane War of the Worlds, depending on the GM's goals.

Two expansions were published for Moon Dust Men, both as part of the Ken Writes About Stuff corner: MAJESTIC Overwatch, where player characters are MAJESTIC-12 members who manage the global war against the aliens, and GALILEO Uplift, which provides rules for gear reverse-engineered from alien technology.