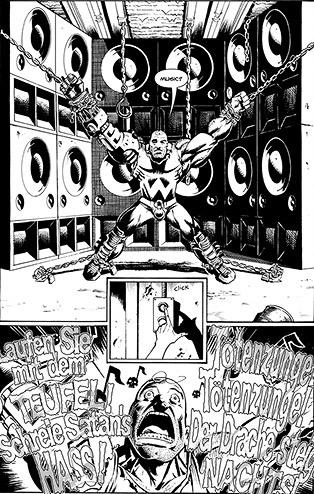 Loud of War is when a character harasses another through the use of sound or music. Perhaps Alice has pointed her speakers at the annoying neighbor and is playing Beethoven's Fifth at full blast. Or an exasperated Bob uses a megaphone at point-blank range to tell Carol he's not her boyfriend. If the neighborhood is especially unfortunate, Deathtöngue and Toxic Vomit will be locked in a band practice battle of ever-escalating volume.

Usually refers to playing music at loud volumes, though not always. The important criterion is that the sound is (1) loud, (2) annoying, or (3) both. Often played for laughs (especially if bagpipes are involved). Any risk of hearing loss will be ignored as an Acceptable Break from Reality. Might constitute Cool and Unusual Punishment (even more so if Suckiness Is Painful).

Also see Sensory Abuse, Brown Note, Dreadful Musician, Make Me Wanna Shout, No Indoor Voice, and Music to Invade Poland To. Sister Trope to Torment by Annoyance, which is the same concept but with something other than music. Supertrope of the Stuka Scream, at least in its original incarnation. Right Through the Wall often has similar results, but the annoying noise in question is specifically sexual in origin.

Not to be confused with the Loudness War, or with Lord of War. Contrast with Musical Assassin. Also compare Incessant Music Madness, which is this trope done unintentionally.

King Ramses: The Man in Gauze

The 2nd plague that King Ramses unleashes on the Bagges is a obnoxious disco song about him.

King Ramses: The Man in Gauze

The 2nd plague that King Ramses unleashes on the Bagges is a obnoxious disco song about him.