Western Animation / Mia and Me 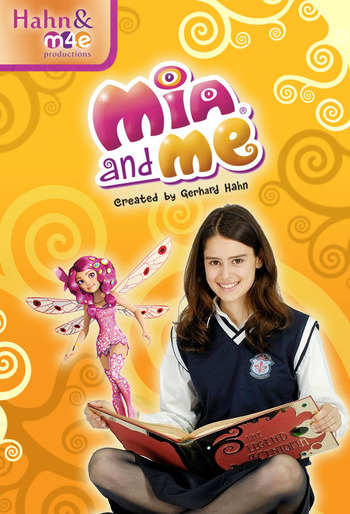 There I'm Mia, here I'm me
I am Mia.
Advertisement:

A live-action / CGI-animated television series created by Gerhard Hahn and fully owned by the German media company "Made 4 Entertainment" (M4E).

Rosabell Laurenti Sellers is Mia Marconi, a young girl very talented with languages whose parents have recently passed away in an unspecified accident. Her aunt brings her to Florence, Italy, where she is enrolled to a private boarding school, and gives her a last gift from her parents: a book her father used to read her daily when she was younger, and a bracelet. The book is about the magical world of Centopia, a fantasy island inhabited by fairy-like creatures called elves as well as unicorns. Soon the bracelet starts to glow and asks her for a "password", which happens to be her name. As the still-puzzled young girl utters it, she is transported into the world her childhood bedtime tales were set in, and finds herself transformed into a Centopian elf, with wings and pointy ears.

Though Centopia isn't the land she used to know, but rather a land plagued by drought and besieged by the dark elven queen Panthea and her minions, who roam the land in search of unicorns to kidnap. Mia, who's the only one able to understand the language of unicorns, befriends the elven prince Mo and his best friend Yuko and helps them fighting Panthea.

In each episode, Mia travels from our world to Centopia and back, living different parallel adventures with her human schoolmates and her new elven friends.

A second series was produced, set during the summer break which Mia spends at her grandfather's farm somewhere in Tuscany. Some extra info on the characters are provided, such as Mia's last name and that of her human arch-nemesis Violetta, as well as a little background on the latter's family (explaining why she's such an Alpha bitch), and we learn what had happened to Centopia prior to Mia's arrival.

For the third series, Mia was recast with a new actress (Margot Nuccetelli) after Rosabell Sellers started attending college. A fourth series began production in late 2019. A movie is also in the works and will be released sometime in 2021.

Mia and me provides examples of the following tropes: