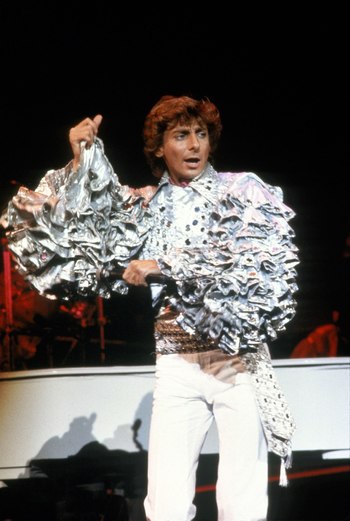 At the Copa, Copacabana...
"My biggest fear is Barry Manilow. I think he's the Antichrist."
— Ozzy Osbourne on his primal fear, Late Night with Conan O'Brien
Advertisement:

Barry Manilow (born Barry Alan Pincus, June 17, 1943 in Brooklyn, New York) is an American singer/songwriter famous for composing every song ever written, including hits such as "Mandy"note actually written by Scott English and Richard Kerr, "Can't Smile Without You"note  written by Christian Arnold, David Martin, and Geoff Morrow, "I Write the Songs"note  written by Bruce Johnston, longtime member of The Beach Boys, "Looks Like We Made It"note written by Richard Kerr and Will Jennings and "Copacabana"note in fact co-written by Manilow, along with Jack Feldman and Bruce Sussman.

He ranks as one of the top-selling artists of all time, as well as enjoying street cred with artists Frank Sinatra and Bob Dylan — about as close to "universal" acclaim as you could get. With the collapse of disco in the '80s, however, Manilow was haunted by his reputation as the least hardcore singer alive. A varied composer, he branched into jazz and blues to keep thing fresh, but found himself somewhat pigeonholed by his old hits. With the exception of "Copacabana" (itself a codifier of Lyrical Dissonance), his uplifting anthems have wringed the most consistent success.

Today he has settled into a kind of wry awareness of his Disco Dan image.

To the surprise of absolutely no one, he came out as gay in 2017.

Is the Trope Maker for Stuck on Band-Aid Brand (he wrote the jingle).