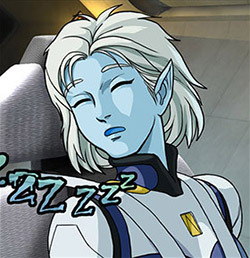 A Stock Visual Metaphor trope used widely in animated media. When a character sleeps, sometimes a lot of "Z's" are shown near the character, either in the form of a stream of z's coming from the character's mouth or head, or a group of "Zzz's" contained in a Speech Bubble. This trope used to be shown specifically for people who snore in their sleep. While snoring is rather tricky to represent (sometimes it's represented as a log being sawed inside a speech bubble), the onomatopoeia "Z" was chosen as an approximation of what it sounds like.

The trope is so obvious that people in media and real life use the term "Catching some Z's", or in Britain, Canada, or Australia, "Fetching some zeds" to indicate they're going to go to sleep. Amusingly, it makes no sense; the Z's usually flutter off into space, and nobody catches them.

See Snot Bubble for the anime version of this. Compare: Circling Birdies.