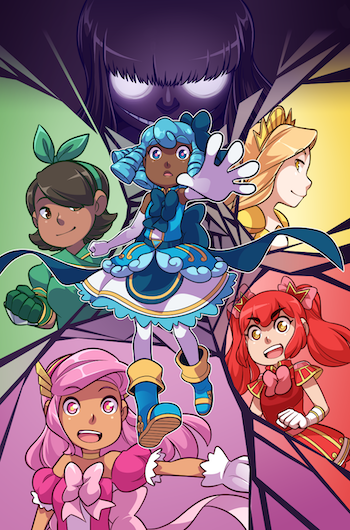 By day, a nameless, isolated city is safe under the Great Barrier. Every night, however, monsters come in from the surrounding lands and terrorize the city. The first line of defense against these monsters are young magical girls, such as the five teenagers that make up Team Alchemical. Practically celebrities, these girls are regarded as champions, are honored and respected above all else, with all the support that implies, especially if they are registered.

It would be almost perfect... except for the part where they have to risk their lives every night.

One night, that risk becomes tragedy and one of the girls of Team Alchemical, Undine, also known as Alchemical Water, decides to find out why it happened. Even if that means she has to do it alone.

is a Hiveworks original webcomic written by Mary Cagle. Mary is also the series' lead artist, though Oscar Vega (previously the artist of Olympus Overdrive) illustrated the first two chapters, and Cheryl Young

would later provide environmental design and background assistance. The comic is edited by Xellette Stillwell (current head of Hiveworks Comics) and Isabelle Melançon (co-creator of Namesake).

The first print volume of the comic, which includes the first four chapters, was published in French in 2018; following a successful Kickstarter campaign, the book would see an English-language release

the following year. In late 2021, the English version of this volume was picked up for publication by Seven Seas Entertainment, with the subtitle "The Price of Magic"

open/close all folders
#-D
Advertisement:
E-M
N-Z
The time is now 2 AM. Please make sure the streets are clear of monsters, and take care on your way home.