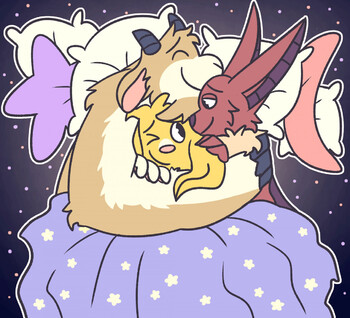 The three protagonists.
"In Slumber, all that you consider real is in your head. And everything that's in your head... is real. Not to mention the waking nightmares. Where else could we be... but a dream?"
— Echo, Book 1: The Pearl (Page 1.164)
Advertisement:

SlumberTown is an anthro webcomic series following the adventures of Romy, Boone and Echo as they work to uncover the mysteries of what brought the 32 residents of Slumber to the strange, dreamy ghost town.

What brought them there? What's keeping them there? And how will they find their way home?

The series is a psychological mystery revolving around themes of community, trauma, mental illness and self-discovery. The world of Slumber is whimsical yet heartwarming with a Found Family feel. It's written and illustrated by Macxi. It launched originally on February 4th, 2019 and is still ongoing.

The town of Slumber is known to have many strange properties. The residents have come to theorize that they're living in a "collective dreamscape" that each resident shares and perceives in their own unique way. Perhaps one of the more staple properties of Slumber is the waking nightmares the residents experience in their daily lives, usually as a result of traumas or insecurities from their past or present. Most of the residents have fuzzy memories regarding their lives before Slumber, often forgetting, repressing or suddenly recalling memories from those lives.

Romy is the newest resident to come to Slumber, and she has ambitions of becoming a therapy dog but has debilitating social anxiety, which makes it difficult for her to overcome doubts and fears and connect with the people around her. Over time, as she settles into the town, she learns to open up and connect to the other residents through their trauma and discovers that role as a therapy dog.

Romy works at the Lost and Found with Boone and Echo, where she assists in finding "lost things" — from family heirlooms to missing children and everything in between. It's often during these fetch quests that the trio gets tied up into the bigger mysteries surrounding the town. With Echo working part-time as a detective, we quickly learn that there's a LOT more to Slumber than first meets the eye.

but can also be found on Tapas

where a Spanish adaptation of the comic by Roque Mapache and Ink Fox Prints is being worked on.

SlumberTown has the following tropes: 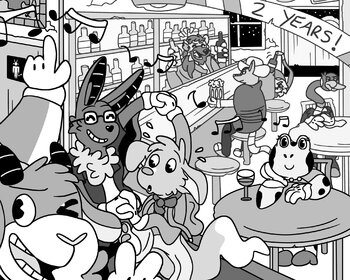 A town celebration at the saloon!

Tropes found in Book 1: The Pearl 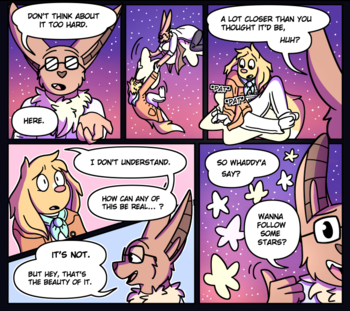 Romy and Echo before they ascend a path of stars on a Journey to the Sky. 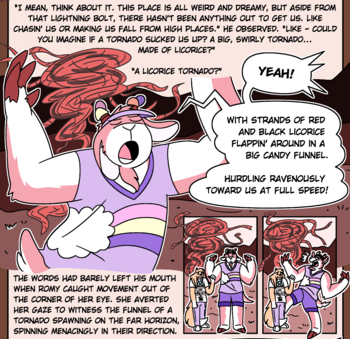 Boone conjuring a licorice tornado with his mind.