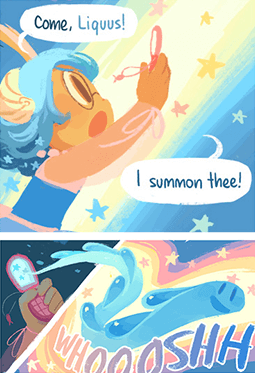 This also means the phone will be fine if she drops it in water.
A supernatural and otherworldly phone, but more commonly a cellphone. It may have the ability to tell the future, it could act as a personal teleportation device or even as a weapon. It may also allow conversations with the dead or supernatural and probably needs Super Cell Reception.

This type of phone tends to crop up in Urban Fantasy works. Also, in sci-fi, instead of having paranormal origins the phone might be highly technologically advanced as an excuse to do all sorts of impossible things. In horror, the phone is usually an Evil Phone and might even be an Artifact of Doom.

See also Phone Call from the Dead and Reinventing the Telephone. Related to Magical Camera (especially if it's a camera phone). Constrast Cell Phones Are Useless.