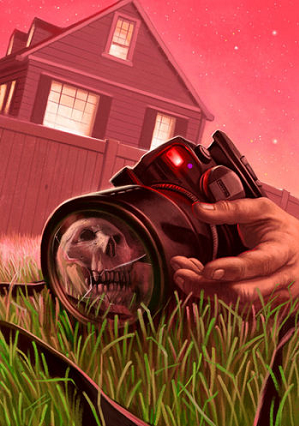 A particularly common piece of Magitek. A handheld device which captures an image is immensely useful, and so it's not surprising that in a fantastical setting, someone will come up with a way to provide such a device, using the magical means at their disposal. Similarly, magic-users in more modern settings can hardly resist using their powers to soup up the technology around them, and cameras are particularly disposed to this kind of tinkering.

Expect the Magical Camera to have traits far different from those mundane pieces we enjoy, and probably to work by a very different means. Or, it may be just like any other with only a slight twist. But at the end of the day, it is at its core a device which exists to preserve the image of a moment in time.

On a related note: it is a superstition of some Real Life cultures that cameras and photography are harmful, with many believing that being photographed may steal their soul and taking great pains to avoid it (This is ostensibly the Soul Jar variant of the Phantom Zone Picture). This is a handy excuse for shy individuals or people wishing to remain anonymous, usually because of some criminality or witness protection system. Nevertheless, the claim that cameras steal souls is a functional form of the Magical Camera, and one you'll occasionally encounter in straight fantasy as a reasonable fear.

Magic employing a photograph itself also counts. Not to be confused with Magical Security Cam.