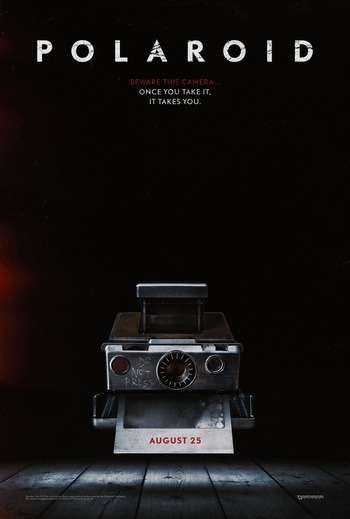 Beware this camera...
Polaroid is a horror film based on a short by Lars Klevberg starring Kathryn Prescott, Tyler Young, Samantha Logan, Mitch Pileggi, and Javier Botet. It was supposed to be released on December 1st, 2017, but was delayed due to The Weinstein Company's troubles. It was given a digital release on September 17, 2019, and a limited theatrical release on October 11.
Advertisement:

The film centers on high school loner Bird, who stumbles upon a Polaroid vintage camera. She soon discovers that whoever has their picture taken by the camera will meet a tragic end.