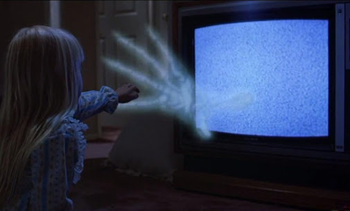 Wow! These 3D effects are so realistic!
"No inanimate object should be capable of malice, but in a world of vengeful spirits and arcane magic, anything is possible."
— Tree of Men tooltip, Salt and Sanctuary
Advertisement:

Take an everyday piece of technology. Maybe a microwave oven, or an MP3 player, or even the very device you're browsing this site with right now. Not very scary, right?

But what if... THERE'S A GHOST INSIDE IT?! BETCHA SCARED NOW, HUH?!

Putting a ghost inside technology can have a range of terrifying (and not so terrifying) effects — perhaps that old camera begins to take photos of the future, or your mobile phone receives phone calls from beyond the grave. Or perhaps it just kills everyone. Very often completely ignores the actual limits of the technology involved, such as the fact that an oven can't chase someone or that computers need power to do anything. This is especially true for Internet-dwelling monsters because Everything Is Online.

Done well, this can be a powerful source of Paranoia. Done badly, it becomes Narmtastic Nightmare Retardant.

Not to be confused with Virtual Ghost, where futuristic technology allows a ghost to inhabit a computer. Not related to Ghost in the Machine. Compare with Digitized Hacker, where the ghost is virtual, not supernatural, and Man in the Machine, a still-living person conjoined with a machine or a piece of technology. See also: Attack of the Killer Whatever.

Strangely enough, Japanese mythology regards this as particularly unlikely as supernatural beings are said to avoid electricity. Bamboo Technology should theoretically be susceptible to this, however.

See also Electromagnetic Ghosts, for when they just cause problems with technology, yet don't inhabit it.