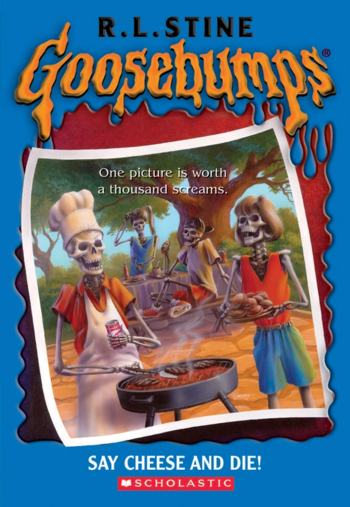 Primitive tribes fear the camera. They say it can steal a person's soul. This camera is far worse. Far worse.
— Spidey
Advertisement:

The Goosebumps book with the cursed camera.

While exploring a local abandoned house with his friends, Greg finds an instant-film camera in a hidden compartment. OK, this doesn't sound too impressive to someone with a smartphone, but in the 90s this was amazing technology. He tries it out on his friend Michael, who promptly falls through the floor — and that is what the photo shows. Indeed, every picture the camera takes shows the subject dead or horribly injured, which inevitably comes true. When his friend Shari vanishes after he takes a photo of her, he must find a way to undo the effects of the camera and save his friends.

It has one direct sequel, Say Cheese and Die — Again!, in which Greg faced danger after using the camera — again. The camera also appears in the Goosebumps HorrorLand book Say Cheese — And Die Screaming, but with a completely different Backstory.

This book was adapted into episode 15 of the first season of the TV series.

It was later reissued in the Classic Goosebumps line in 2009 as a companion to Say Cheese — And Die Screaming!.